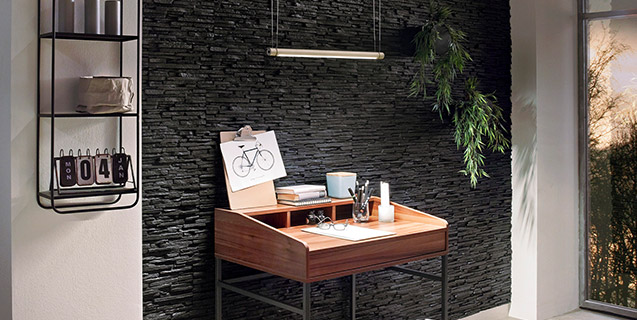 KENDO: pendant working light during the day – luminaire for candlelight dinner in the evening

The luminaire is particularly bright and yet glare-free thanks to specially adapted Fresnel lenses. KENDO is available in three lengths and three colours. It is a modular luminaire; individual colour combinations and combinations with other luminaires of the SLACK-LINE product line are possible. A 1-bay or 3-bay free-standing luminaire base is also available for KENDO lighting modules, which can accommodate KENDO in all three lengths.

The control element (gesture control) can be assigned all the functions provided by the app via the Casambi app, e.g. switching/dimming, changing light colour, controlling scenes and groups (also in conjunction with other Casambi luminaires) etc.
Example: For a multi-flame luminaire, all luminaire heads can be combined into one group. One of the control elements controls the brightness for the entire luminaire, another controls the light colour.

A simple gesture – probably the most intuitive way to control light. Below the luminaire, a sensor reliably detects the direction of movement and position of the hand. A discreet hand movement is enough to switch the luminaire on and off. If the hand remains under the luminaire for a longer period of time, the dimming function is activated.

One or up to three KENDO S, M or L modules can be positioned in any combination in the BASE ONE and BASE THREE module base. The operating functions (gesture control and Casambi) of the individual KENDO modules remain fully intact during operation in the module base. Alternatively, the JAMES charging station can be used instead of a KENDO. Unused module slots are closed with the enclosed small metal caps